Kettler Alu-Rad, a member of Europe’s leading bicycle purchasing cooperative Zweirad-Einkaufs-Genossenschaft (ZEG), is beginning with the construction of a new production facility in the German state of Saarland. As early as the first quarter of 2022, the first e-bikes are expected to roll off the production line from one of Europe’s most modern bicycle and e-bike production facilities. In the final expansion stage, the state-of-the-art plant is expected to employ around 300 people. The timing for the current “groundbreaking ceremony for the future” could not have been better. Even though ZEG will not be the first, but certainly not the last supplier to emerge from the current situation – characterized by high demand for high-quality e-bikes and resulting supply bottlenecks – Kettler, as a pioneer for aluminum bicycle frames, has always (i.e., even before the takeover by ZEG) strongly focused on “Made in Germany.”

To ensure that the ambitious final handover date in the first quarter of 2022 can be met, the state-of-the-art production facility with combined high-bay warehouses and offices will already be handed over to the bicycle supplier in several coordinated steps during the construction phase.

ZEG emphasizes that the new plant in St. Ingbert is not intended to replace the Kettler Alu-Rad factory in Hanweiler (25 kilometers away) but rather complement production. After all, following the takeover of Kettler Alu-Rad in 2015, ZEG increased production capacity and professionalized it, focusing on products for the specialist bicycle trade and smart solutions for e-mobility. As a result, the number of available jobs has risen from 75 to more than 200.

Together with the production site in Hanweiler, Kettler Alu-Rad says it can realize the production capacities it needs for the future. Whether Kettler Alu-Rad’s new plant will then exclusively assemble e-bikes for its own brand Kettler-Rad or also for ZEG’s other bicycle and e-bike brands was not explicitly communicated. 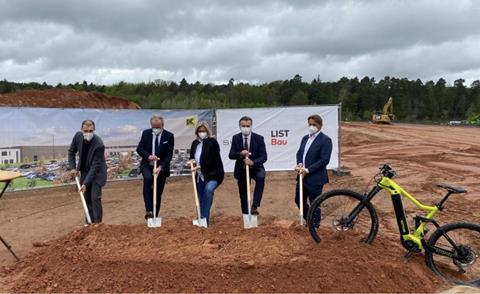