After last year’s insolvency of French bicycle component manufacturer Mavic SAS and its acquisition by Bourrelier Group, things remained quiet at first, at least on the surface. Now, at the unveiling of its latest product line on April 24, the newly formed Mavic Group gave a closer look at its current situation and future course.

The French Bourrelier Group SA, the parent company of the new Mavic Group formed in August 2020, is itself a specialist in the distribution of DIY, garden and decoration products. With Mavic, owners Jean Michel Bourrelier and Yoann Bourrelier are not only entering the bicycle business but also aim to further expand Mavic’s global business. While Jean Michel and Yoann Bourrelier will form the board of the new Mavic Group, Christopher Bouvet will steer the fortunes of the group as managing director. Together, they now intend to put the company “back at the forefront of the market by focusing on customer’s benefits first.“

The group’s size and direct involvement of two owners allow the company to be more agile than ever, the new management said, and thanked all Mavic aftermarket and OEM customers at the presentation: They kept the brand’s “order books at a high level which is facilitating the turnaround project.” It was also announced that the new Mavic headquarters, currently under construction, will include: Carbon labs and prototyping, testing facilities and special production lines, R&D labs, the European Mavic service center, the racing department and all supporting functions such as design, communications, marketing, IT, finance and administration, operations management, etc. In addition, a robust and efficient supply chain organization is designed to ensure that components are developed in France and produced close to the market – “Made in Europe,“ both in France and Romania. Concerning softgoods, Mavic wants to focus on Made in Europe “as much as possible.”

In the U.S., a new sales structure is in the works. While Mavic Group will continue to rely on its own sales offices in countries such as Germany, Italy, Japan, Spain and the U.K., it will also rely on exclusive distributors in other countries all over the world. In Belgium and the Netherlands, for example, Hartje; in Switzerland Tekno Parts. In addition, local Mavic service centers are to be established in the respective country markets.

The Mavic Group will continue to serve the sporty bike scene with its entire portfolio – divided into mountain bike and road bike – with premium products. Both product categories also already include the currently booming e-bike sector. 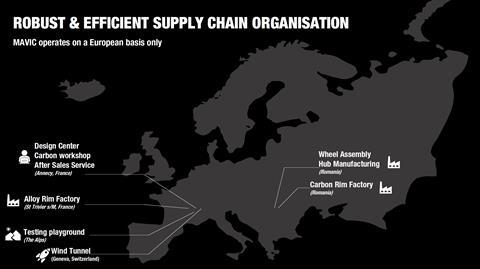 Focusing on a fast supply chain within Europe: the newly established Mavic Group