After listed Pierer Mobility AG officially announced on Nov. 3 that its subsidiary KTM AG (not to be confused with e-bike pioneer KTM Fahrrad GmbH) was taking a 25.1 percent stake in rival MV Agusta Motor S.p.A. as part of a capital increase, the Italians announced a €30 million capital increase “on the part of the company’s shareholders and KTM AG” on Nov. 15 ahead of their extraordinary general meeting. In this context, the new shareholder, KTM AG, was also officially introduced at last week’s meeting. It was also announced that the new MV Agusta Board will, in the future, include two members of the KTM senior management team.

“I am excited about this important agreement and delighted to welcome KTM AG, Europe’s leading powered two-wheeler manufacturer, into the MV Agusta family,” said MV Augusta Motor CEO Timur Sardarov at the meeting held at the company’s headquarters in Varese. “Driven by our shared vision of excellence, the principal goals of our alliance will be the consolidation of our core business and the production of high-performance motorcycles in the premium segment. I am confident that the agreement will strengthen our brand in a complex and challenging marketplace.”

Targeted investments in and synergies for the motorcycle sector

According to the company, the cooperation associated with the acquired minority stake on the part of KTM AG relates exclusively to the motorcycle sector. The comparatively young e-bike and e-scooter business of MV Agusta is not affected by the financial injection of the Pierer Mobility subsidiary.

As already suspected in our prior coverage of Pierer Mobility’s entry into MV Agusta, the Austrians have also placed the majority takeover of Syntace, including its high-end MTB brand Liteville, announced in mid-September, under the umbrella of the said Pierer Radbeteiligungs GmbH.

This is shown in the updated group structure chart presented below. It also shows exactly how high Pierer Industrie AG’s share is in the individual companies that roll under the group umbrella. 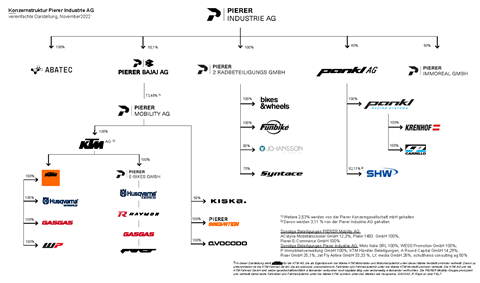