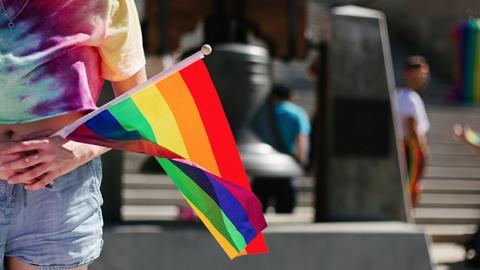 LGBTQ collections become mainstream for the sportswear and fashion industry

The LGBTQ (lesbian, gay, bisexual, transexual and queer) fashion market has been growing over the last decade. In recent years, an unprecedented number of mainstream brands have begun to release LGBTQ collections.

“We are now at the point where it’s the exception to the rule not to be rallying to the LGBT cause,” said Jonathan Lovitz, the vice president of the Washington-based National LGBT Chamber of Commerce. “It has moved from being a tiny part of what businesses do, to being a central driving force right at the heart of those businesses.”

LGBTQ consumers’ brands are partly catered for by specialist brands like The Phluid Project, a company that produces gender-neutral clothing. But all-purpose labels now dominate the market. Nordstrom and Havaianas, the Brazilian flip flops brand, released their first ever Pride collections this year. Companies including H&M, Gap, Converse, Levi’s, Nike, Abercrombie & Fitch, and American Eagle all now cater for the LGBTQ community.

LGBTQ-specific collections are generally released to coincide with the global Pride celebrations, which take place globally in June. Products commonly feature Pride rainbows, multicolor designs, unisex designs and messages alluding to the themes of freedom, equal rights and self expression.

Companies that champion LGBTQ causes can hope to draw more diverse job applicants and a broader range of supply chain applicants, Lovitz pointed out. Most crucially, however, pro-LGBTQ businesses draw greater respect and loyalty from LGBTQ consumers. In 2016, a study by the Washington-based Witeck Communications firm estimated that the buying power of the American LGBT community the previous year was $917 billion. A separate 2019 study by YouGov on 4,000 Americans found that 74 percent of gay and lesbian individuals said they were more likely to buy from LGBTQ supportive brands, as were 35 percent of people of all sexual orientations between the ages of 18 and 34.

From rainbow T-shirts to wide-ranging collections

As brands increasingly acknowledge the economic firepower of the LGBTQ community, they have sought to appeal to what is a broad church with increasing ranges of products. Ten years ago, it was common for companies to simply “slap a rainbow” on T-shirts, Lovitz said. Now, they release all-encompassing collections with genuine aesthetic value. Reebok’s extensive “All Kinds of Love”, released on May 18, was characterized by the heavy use of a dusty tie dye-like print applied to apparel, accessories, training shoes and sneakers. Puma’s 13-piece “From PUMA With Love” collection, released in June, featured vibrant colors, rainbow designs and bold graphics on T-shirts, sweatshirts, accessories and slides. The collection was designed in collaboration with Cara Delevingne, the openly bi-sexual actress, model and LGBTQ activist.

But products are not enough. To win over LGBTQ consumers, companies must also engage in “authentic” marketing, Lovitz said. One way to do so is to collaborate with LGBTQ advocates or charities. This year, Nike announced $500,000 in grants for 20 organizations supporting the LGBTQIA+ community. In February, The Trevor Project, the LGBTQ suicide prevention organization, announced Puma will donate $1 million over three years to foster more inclusive environments for young LGBTQ athletes. Asos, the British online fashion and cosmetic retailer, is donating 100 percent of proceedings from this year’s pride collection to GLAAD, the American non-governmental organization working to promote LGBTQ representation in the media.

“In the last five years companies have analyzed the data. They now understand that what they put in [financially] they get back in the long term,” said Lovitz.

The LGBTQ community is vigilant in monitoring corporate sincerity

However, LGBTQ consumers are becoming increasingly savvy at distinguishing LGBTQ fakes from brands that genuinely support the movement, he added, for example by using the HRC Foundation’s Corporate Equality Index, which rates companies based on their LGBTQ equality credentials. “If you get our attention [with LGBTQ products and marketing] then you need to back it up,” said Lovitz. “It is now much easier to see what businesses are doing, and the [LGBTQ] community is looking.”

Companies whose support of LGBTQ is deemed to be superficial, non-committal or misguided risk being punished. In August, Next released a rainbow-themed children’s shoe range, but drew derision on social media for distinguishing between girls’ and boys’ products.

In China, where homosexuality was decriminalized in 1997 but was officially listed as a mental disorder four years later, discrimination against openly LGBTQ individuals remains common. In August, Cartier released a Chinese advert for a ring, which portrayed a succession of both female-male and male-male pairs and ended with the message “How far would you go for love?” Viewers concluded that the pairs were in romantic relationships and that the advert was supportive of LGBTQ rights, yet Cartier later sought to depict the two men as father and son. The apparent backtrack prompted a fierce social media backlash, with LGBTQ-focused users voicing incredulity and criticism.

Asian markets are becoming increasingly important, as the epicenter of the LGBTQ fashion market shifts from the U.S. and Europe. In China, the LGBTQ+ population numbers 90 million – over three times larger than the number in the U.S. – and had an annual purchasing power of $938 billion in 2017, according to Chinese group Daxue Consulting. Demands that the government legalize same-sex marriage are gathering momentum, with a representative of the Chinese executive revealing for the first time in the nation’s modern history in December that officials had received a number of petitions to introduce the measure into the civil code.

In July, the government of Thailand, where 4 million people identify as LGBTQ, approved a draft bill that would make same-sex marriage legal. “Countries across Asia such as India and China are fast becoming the focus of LGBTQ marketing strategies. These are places where homosexuality was illegal until a few years ago,” said Lovitz.

The next big challenge for brands will be to stand out in an increasingly competitive LGBTQ market, he concluded. Sparking consumers’ imaginations will be crucial. “Storytelling is key to moving the industry forward,” Lovitz said. “How does buying from you benefit us? Are our purchases being put back into the community? Are you putting a spotlight on the LGBT ecosystem? These are all questions to which we want answers.”

This article first appeared in our sister publication Shoe Intelligence.

Photo by Allie on Unsplash