Italian mountain sports brand La Sportiva has announced that after more than 19 years as general manager, Lanfranco Brugnoli is retiring from the company. The new GM alongside Lorenzo Delladio, CEO and president, is Marcello Favagrossa. With Brugnoli and Delladio at the helm, the company has seen consistent double-digit growth over the years and a repositioning from a footwear company to a global brand with expansion into technical mountaineering apparel and consolidation of strategic markets such as North America and China.

The designated new GM, Favagrossa, most recently served as GM of Eataly in Milan, a food and beverage chain, and prior to that spent 11 years with Luxottica in the U.S. and Italy, including nearly four years as GM of Sunglass Hut. After graduating from university, he started his corporate career first at Barilla and Bolton Group before joining Parmalat as marketing director.

In the recent past, La Sportiva has reorganized its business processes. In particular, marketing has taken on a central role with the appointment of Giulia Delladio as corporate marketing director. She is the fourth generation of the family and will most likely take over the reins of the company should her father, Lorenzo, retire one day.

With the new structure in place and Favagrossa joining the family business as GM, the team is “now tasked with achieving strategic goals through sustainable growth and expanding the wealth of expertise built up over the years.” Giulia Delladio explained that one of the fundamental focuses at all levels will be sustainability. 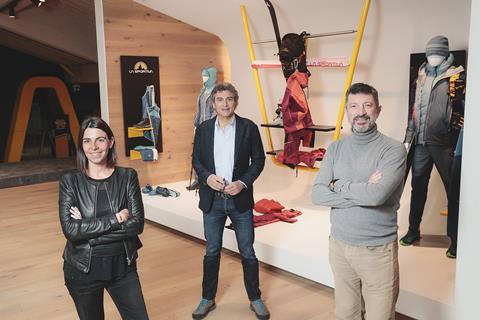