Interview with Heiner Oberrauch, president of the Oberalp Group 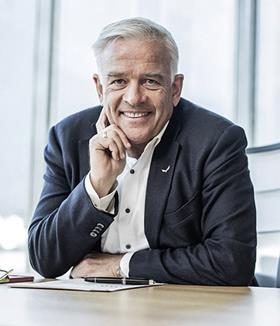 We recently heard a lot about the Salewa brand and its operational decisions and support programs during the Covid-19 crisis. After the interview with Salewa’s managing director Stefan Rainer, the Compass now had the opportunity to speak to Heiner Oberrauch, president of the Oberalp Group and owner of the Salewa brand.

Compass: Which part of your production was adapted for the manufacture of masks and suits?

Heiner Oberrauch: In Italy, we converted our sample sewing shop in Montebelluna to the production of face masks and water-repellent protective coats in mid-March. We are supported by other partners, external sewing companies from the Veneto region also shifted to the production of protective equipment. Our warehouse in Bolzano no longer only houses products of the Oberalp brands such as Salewa and Dynafit, but is also used to store and distribute materials from China on behalf of the South Tyrolean Civil Defense department. The fashion house Oberrauch Zitt, which also belongs to the group, also produces face masks in its sewing factories in Bolzano and at the Lodenwelt in Vintl.

Which and how many products can be produced in Italy and in China?

Is the production in China, in general, running again?

I should mention that at Salewa and Dynafit, we have hardly any production in China. But yes, production is up and running again in China, while in other countries – such as India or Vietnam – production is now blocked for 1-3 weeks. Mask production in China is not only running normally again during the day but in multi-shift operation, i.e., also at night.

For which of the products do you use Gore-Tex?

The protective suits are made with the Gore-Tex membrane. Medical doctors are pleased with them because the suits are breathable, whereas other protective suits are not. Another advantage is that they are washable. However, we do not have any information on whether Gore-Tex® blocks Covid-19. The protective masks are made of a multi-layer fabric mix, not with Gore-Tex. We produced samples and sent them to the medical authorities for approval.

In which regions and according to which criteria are the products distributed? Which authorities is Salewa in contact with?

The Salewa Oberalp Group procured the protective equipment for the Province of Bolzano and the South Tyrolean Sanitary Unit, and then, in the second stage, for the South Tyrolean Civil Defense. One reason for this was the already existing good contact with our license partner in China. In addition, we were able to make quick decisions and immediately provide the capital for the purchase without any official obstacles. Our logistical experience was also an advantage.

We are not allocating the goods ourselves. We cannot and do not want to set priorities; this is done by the medical service and the Civil Defense. We have pre-financed and imported the goods on behalf of the public authorities, they are now their property, and they decide on the distribution. But we take over the logistical distribution as an external provider within the country because we have the necessary experience and equipment. Since the order was very large, the South Tyrolean government decided that a considerable part of the goods would go to the northern Italian hospitals and about 20 percent to north Tyrol. We are conscious that the pandemic does not only affect us but has a global dimension. After all orders from the medical services have been delivered, we will, therefore, continue to procure protective materials for a limited time, which can then be purchased outside South Tyrol and Italy.

Do you plan to supply other regions/countries besides South Tyrol and Italy?

Yes, if desired and/or needed. But we will withdraw from the business after bridging the current emergency situation.

How does Salewa finance all this? Is governmental financial support to be expected, or does Salewa pay in advance or even “donate” the products?

As it was essential to respond quickly, the Salewa-Oberalp Group made advance payments. We pre-financed large sums of money and transferred them to China. We received financing from the banks at exceptional speed; the public sector would not have been able to react so quickly. However, public authorities have assured us that we will be paid soon after delivery. The first products from our own sewing factories were made available to hospitals free of charge.

What was the initial reason for you to take action?

We received calls from the South Tyrolean governor, Mr. Kompatscher, as well as from the medical district administrator, Mr. Widmann, asking for our support, and of course, we agreed to help immediately. Pre-financing everything without any official backup or assurances was somewhat courageous. The Chinese factories only started production when they registered payment on their bank accounts. I was very relieved when the goods were loaded onto the plane.

What is the Oberalp Group’s forecast for the economic impact of the corona crisis?

If the total shutdown of the economy continues for a more extended period of time, the consequences will undoubtedly be dramatic, because the tax and social systems of the countries can no longer be financed. This is particularly true of Italy.

Businesses already in crisis will not be able to cope, and unfortunately, jobs will be lost as a result. I hope that, after the crisis, businesses will remember not to limit the production of certain goods to one part of the world and that regional economic activity will once again become more valuable. It is also important for Europe to reduce taxes on labor and to be internationally competitive.