Rapala VMC Corporation, a Finnish manufacturer of fishing lures, equipment and tools, has unveiled a new strategy aimed at one of the first fishing tackle companies to act upon a set of seriously ambitious environmental objectives. This includes actions already implemented over recent years as well as a series of ambitious new environmental objectives, such as increased use of renewable energy, reduced use of fossil-based plastics in products and packaging, and more efficient waste recycling processes to name a few. The program will be implemented in all of Rapala’s business units.

Rapala says it has been active in identifying and minimizing its negative impact on the environment prior to this decision. For example, the release of volatile organic compounds (VOCs) in the lure manufacturing units in Finland, Estonia and Russia has almost halved in the past four years. The company also introduced new packaging designs in 2010 containing 50 percent fewer plastics compared to the previous packages. The individual components in Rapala hard baits have also been carefully reviewed and substituted for more ecological options wherever possible without compromising the product performance that users have come to love. As examples, the company cited that Rapala wooden lures are currently up to 40 percent bio-based and that 85 percent of the hard baits it offers are lead-free. Through actions such as these, the carbon footprint of Rapala’s lure production facility has already decreased considerably during the past four years.

In the years to come, Rapala plans to launch programs and product families with sustainability at the heart of their development, the company said. It aims to introduce 100 percent lead-free Rapala wobblers by 2023, further reduce the amount of plastic used in lure packaging, release new plastic-free packaging for multiple product categories and brands, and shift to renewable energy in all of its lure production units. The carbon footprint of lure production is now one of the key performance indicators that are assessed on a regular basis and used to determine the environmental impact.

“I am extremely happy to see that the company is able and willing to take these steps to become more environmentally friendly. It is very important that we, as one of the biggest fishing tackle companies globally, step forward and show that we care about our impact on the environment,” said Taneli Väisänen, Rapala’s research and sustainability manager. 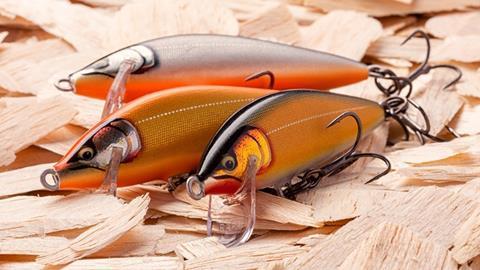 Rapala’s CountDown Elite 75 – a lure made from natural balsa wood.