The British Snowsport Tradeshow happened in central England last week, on the Welsh border, to allow relatively easy travel for everyone to reach the event. Building on previous events, the exhibition had also combined with the Outdoor Industry Association (OIA), so those outdoor brands had a chance to demonstrate their winter ranges to the retailers. The partnership had been worked out in advance, but with the change of scheduling of ISPO, it became the major event. The U.K. has taken a more liberal stance on Covid-19 restrictions, and the timing (with the announcement that the restrictions would be all but lifted to distract from the government’s “Partygate” scandal) meant that most attendees were shaking hands and not wearing masks, but social distancing was still respected. 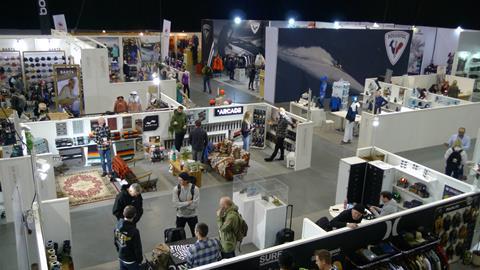 Slide/OTS 2022: A rare opportunity to meet in person.

During the lockdown, a lot of brands had developed channels to supply users directly, but this fair was aimed at the retailers who have always had a vital role to play as both a third party endorsing a brand but also explaining the benefits face-to-face as well as position the product as part of a wider range of purchases, and letting the best size be easily judged – all of which leads to a more enjoyable purchasing experience.

The fact that it happened meant that attendees came! Attendance was up 42 percent compared to the previous Slide. All exhibitors were happy to be there. When off Zoom, so much more of the body language is picked up, making for an easier selling process. There were added features that the OIA had brought from their own exhibition – like the Sustainability Breakfast, hosted before the trading starting on the second day so that brands could take part as well. Andrew Denton, CEO of the OIA, had hosted the first trial of this at the Outdoor Trade Show in Liverpool last summer and the demand for tickets outstripped supply. Equip continued their sponsorship in terms of providing the foodstuffs and one of the keynotes. The EOG is acknowledged as the body that started this joining together of interested parties. It encourages pre-competitive sharing of knowledge so that the whole industry progresses faster towards common goals. The other keynote came from Protect Our Winters (POW), and the British branch of the organization is better thought out than the audience appreciated.

Debbie Read, head of CSR at Rab and Lowe Alpine, detailed her company’s participation in the EOG Single Use Plastics project and how it had now switched to dispatching product to end-users without the protection plastic wrappers that the factory uses to ship the goods. They had tried this several years ago, but it was not popular with the British individuals; however, raising the knowledge around the single-use plastics challenge and plastic waste has changed opinions. The new practice had been well received. By collecting the plastic at the Equip warehouse, it went onto full recycling instead of being left to the consumer collection systems, which resulted in the downcycling of the same product.

Adam Hall from Internet Fusion, also a trustee of POW, took the audience through the eight-stage plan to easily improve their environmental impacts, ranging from the simple switching to green energy to swapping the pension plan away from a scheme that invests in poor practice. There followed questions from the audience until the end of the formal session – but the conversations went on in groups throughout the rest of the morning. The biggest take-away was the lack of knowledge of impacts, especially those from Tier 3 (the suppliers to your suppliers); however, if everyone were to assess their own footprints (Tier 1) and then demand the same of their suppliers (Tier 2), that would apply pressure to the whole of the supply chain and remove the vagueness of Tier 3. What was apparent from the breakfast was how everyone wanted this raising of the bar within the industry.

The show itself was producing orders, especially as it allowed rival ranges to be seen and felt within minutes of each other – thus confirming which were most suitable to a particular customer. As was normal post a period of disruption, there were many product aesthetic changes, but not too much innovation in technology. The end-user tends to purchase products they have used before instead of wanting better product. 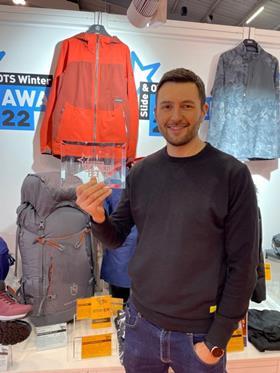 Adam Jowett, brand sales manager Artilect, was one of the award winners at the show

There had also been a judging of the best products with the attendees voting for their favorites in a range of categories. The winners of the Slide & OTS Winter 2022 Awards were announced at the end of day 2 of the show, Jan. 19:

In conclusion, the Snowsports Industry of Great Britain had been able to stage a popular exhibition, boosted by the OIA member presence, which gave retailers the added advantage of quality knowledge, which will enable them to highlight how retail still has a significant role to support the brands. At the time of building back better, it has been too easy to ignore the subtle changes of the consumer demand, which now places the values of the brand on a level approaching the commercial and performance aspects. Those in the supply chain that realize this will build in strength.