Opinion: Outdoor by ISPO webinar, co-hosted by the EOG

At the end of last month, there was a webinar about the show in October, which will happen outside the regular buying window for brands selling to retailers. The European Outdoor Group (EOG) had already spoken to their membership and would host up to 100 shell-scheme stands supporting the event. Most brands have looked at this favorably as they would already have their Fall-Winter 22/23 samples and could start the sell-in process.

The event will be more a version of the European Outdoor Summit (EOS), but for a wider audience of 1,000 people – all hosted in the conference suite of Messe München. The EOS has happened every autumn and has up to 300 CEOs and marketing-type directors attend to come up to speed with the bigger incoming issues (like talking about Blockchain as they did four years ago). 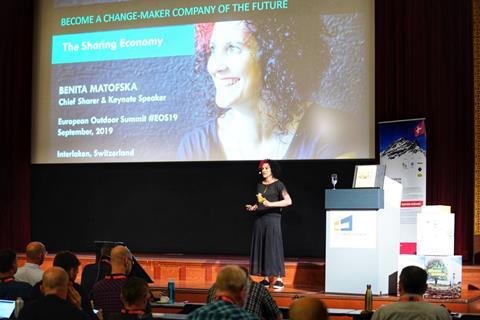 Benita Matofska presents on the sharing economy at EOS 2019

The key issue is whether they can get the numbers to attend the event, which will be structured around two two-hour conference sessions a day. At the same time, the event is aimed at retailers first and foremost (as this is the area that has the most potential to come up to speed on issues that the EOG drives), so will they alienate the previous attendees? The stands in support are there to catch the conversation before and after the main presentations. For those brands who need to be won over to a new principle, this could be an ideal opportunity to initiate conversations. Topics like the greenwashing around Biodegradability will hopefully be tackled as part of the main agenda, but whether wool should be reconsidered as an insulation Ingredient would make a good conversation from an exhibitor. Hopefully, there will be some training services (provided by the Brands as they help sell-through, or by Independent providers to bring up the professional standards within shops) that will appeal to the retail audience.

Shows have become more professional this millennium as the main European trade fair has progressed from the British version, which started on a Sunday when I joined the industry. The driver for this was that the business owner could bring his whole staff for a day out while the door to the shop was closed to see what the industry was doing. Now the show has caught up, and there are many more “information” sessions that ever used to exist; when OutDoor was in Friedrichshafen, it was too easy to spend the whole of each and every day following the sessions and not even call by any stands. One year the update briefing on long and short-chain DWR fluorocarbons by Dr. Taylor at Leeds University had as many people standing up or sitting on the floor as the 100 chairs in the room.

The information sessions have grown, and the whole set-up was productive. The brand teams used to attend the briefings, and the EOG Breakfast session best summed it up – there was the core 100 in the audience and up to triple that amount attending, brought in by the agenda subjects. Originally these gatherings were listed as the “Sustainability Breakfast,” but as the EOG successfully integrated the responsible attitude to each function it did, the adjective got dropped. The timings of these sessions before the show opened in the morning were so that the brands could attend and still make it to their day jobs.

The crucial aspect is whether the ISPO conference will be able to attract the retail staff to this event without making the leaders of the industry or the brand personnel feel unwelcome. The retail point should be the most important in the whole of the chain as it is here that the success of the great marketing plans can be judged. It is not that hard to improve the customer experience (which will take the lead influence back from brands selling products direct to consumers), especially as all parties want this to happen. Every time the EOG has put its mind to changing aspects of one of its projects, it has succeeded, so I think the event will be one of those amazing successes that will make people think that they should have attended in hindsight. The important question is whether Outdoor by ISPO will get acknowledged as this before it happens (and thus gets the footfall it requires to make its staging worthwhile financially). Business manuals advise changing only one aspect at a time, but this has several new variables.

I will be turning up for it as it should provide a great opportunity to have those face-to-face conversations where we can learn from each other easier than just over a Zoom screen. As a pedagogue, I know that the vital part of any educational process is the 2-way nature of communication. Lockdown has forced much re-evaluation of our activities, but the aspect that is missing from the online lectures that I have given has been the person who takes me to one side to say that they just don’t get over the start point of a particular subject. This is not something people are happy to put in the chat bar, as it is like inviting everyone else to think that they are signaling that they know nothing. Most presentations end with the Q&A session, which is the greatest indicator of whether the pitch has hit its target (and the more you do, the more you realize how you might have made it too basic or even too above the level of comprehension), which means I can make the next presentation even more effective.

Messe Munich’s ISPO and the EOG have always delivered beyond my expectations, so I know even if the event is not the Valhalla it could be – there will be enough of my peers there to make attending it worthwhile as the new normal is defined.