German bicycle store chain and multichannel retailer Bike & Outdoor Company GmbH & Co. KG (B.O.C.) is opening its 38th stationary store nationwide on June 24 on the outskirts of the northern German city of Delmenhorst. It is located in a former electrical store with a total area of more than 2,300 square meters. On 1,600 square meters of sales space, B.O.C. will present a selection of around 1,000 bicycles (including 300 e-bikes), supplemented by accessories and textiles as well as an in-house workshop.

Founded in 1999, B.O.C. now employs more than 1,100 people across Germany and operates a total of 38 stores under the B.O.C. and Bikemax brand names. With this number, B.O.C. says it operates “the largest bike store network in Germany.”

As a multi-channel retailer, B.O.C. also operates its own online store (www.boc24.de). Currently, the company has no intention of opening stores outside of Germany. It seems that it still sees enough unfinished business opportunities in its home country. 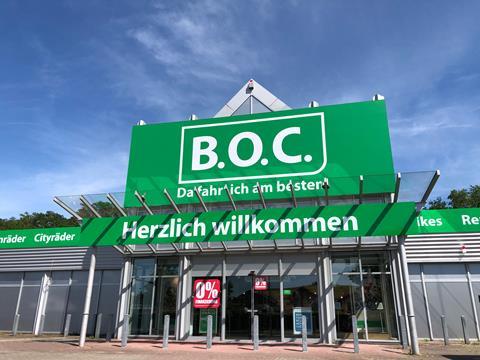 The new B.O.C. Delmenhorst store, which will open on June 24.