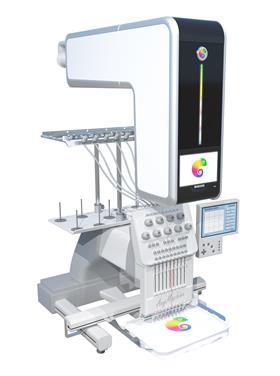 Coloreel has raised SEK100 million (€9.8 million) from Robur Ny Teknik, a Swedish institutional investor in technology companies. The funding will support Coloreel’s future growth and market expansion. Coloreel has developed a patented technology for the digital dyeing of textile thread. The pioneering technology, which enables digital dyeing of a textile thread simultaneously as it is used in production, can be used for embroidery, sewing, knitting, weaving and more, the company says. Coloreel’s first product, which is aimed at the embroidery industry, has been sold and marketed for a year. The market interest has since been tremendous, the company said – from smaller to the very largest brands in lifestyle, sports and exclusive fashion. According to Coloreel’s data, around 750,000 new embroidery heads are sold annually and 7-8 million embroidery heads are currently in operation globally, each of which could be equipped with a Coloreel coloring unit. Despite the pandemic, Coloreel has delivered its products to eleven countries in Europe, the U.S. and Asia, albeit in limited volumes. It has also started business with American Hirsch Solutions, the world’s largest distributor of embroidery machines, which has installed the technology with several end customers in the U.S.