Under the expert guidance of British running specialist Pete Bland Sports, Inov-8 is planning to open its very first flagship store on April 15, located right next to the brand’s headquarters. The 90-square-meter store will be called “The Forge” and is located in the Mill Yard in Staveley, a village in Cumbria, England. With more sustainability in focus, Inov-8 has switched to renewable energy and worked with the property owner to have solar panels installed above the store and office. The Forge will initially be open five days a week, Thursday through Monday, offering running, hiking and fitness shoes and apparel for men and women.

Pete Bland Sports and Inov-8 have a long business relationship: the Kendal-based running store was the first-ever retailer to carry Inov-8 footwear in 2003. The store was founded in 1981 by former athlete and longtime manager of the England mountain running team, Pete Bland, who passed away last December after contracting Covid-19. The store has been run by his son Matthew Bland for the past 12 years and is considered one of the most qualified running equipment stores in the U.K. 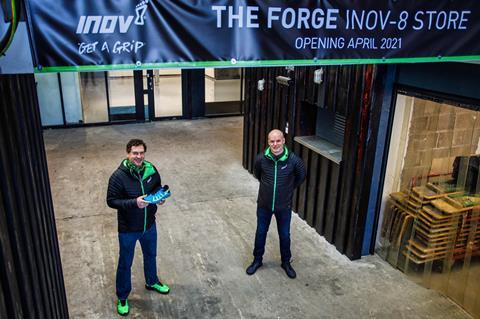