Berghaus has added four new brand ambassadors, Rhiane Fatinikun, Zahrah Mahmood, Ed Jackson and Iona Rendall, to its team. The new lineup is part of the brand’s effort to promote the outdoors as a place for everyone and highlight the mental health benefits of spending time in nature.

Fatinikun is the founder of Black Girls Hike and a champion for diversity in nature. Berghaus has supported the organization and will continue to sponsor its projects.

Mahmood, known on social media as Hillwalking Hijabi, has become a leader in advancing Muslim women’s participation and inclusion in the outdoors. She will work with Berghaus on a number of campaigns and product initiatives.

A paraplegic, Jackson is a former professional rugby player with a passion for the mountains. Despite fracturing several vertebrae in his spine in 2017, Ed has since successfully completed numerous outdoor challenges, including hiking the Pennine Way to raise money for his Millimetres to Mountains Foundation. Berghaus will support Jackson through 2021, including a trip with Leo Houlding to climb Mont Blanc and an expedition to Himlung Himal, a 7,000-meter peak in Nepal that Jackson will attempt to climb to raise funds in order to build a spine clinic in Chitwan Nepal.

Rendall is a nurse, adventurer and founder of a social enterprise and hiking group that helps people enjoy the outdoors. Berghaus will work with her to bring her messages about the importance of supporting one’s mental health to a wider audience.

Janine Hearn, global head of brand at Berghaus, said, “Rhiane, Zahrah, Ed and Iona are all inspiring individuals who embody the movement for more diversity in the outdoors, and the work each of them is doing to make that happen is really important.” 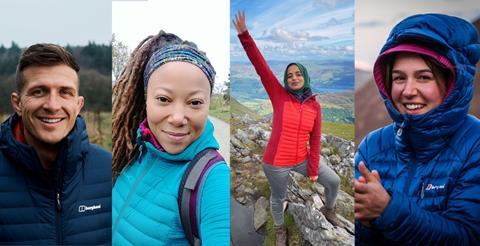