According to 2020 data released by Eurostat on July 20, Portugal is the largest bicycle producer in Europe for the second year in a row, with a total production of 2.6 million units. In 2019, the country had risen to the number one position in Europe for the first time. The leadership position is based on previous efforts to establish a domestic international bicycle production center for the European bicycle market under the specially created “Portugal Bike Value” umbrella. With the help and support of government and EU funding, Portugal’s emerging bicycle factories kept the pole position with its above noted total 2020 production of 2.6 million bicycles. Last year’s European overall bicycle production stood at 12.2 million bicycles.

“Although we went through a difficult period with the closure of production for almost two months and the lack of some components in the domestic market, the Portuguese two-wheeler and soft mobility industry continues to assert itself as a leader in Europe,” said Gil Nadais in his role as secretary-general of the Portuguese bicycle industry association, ABIMOTA. 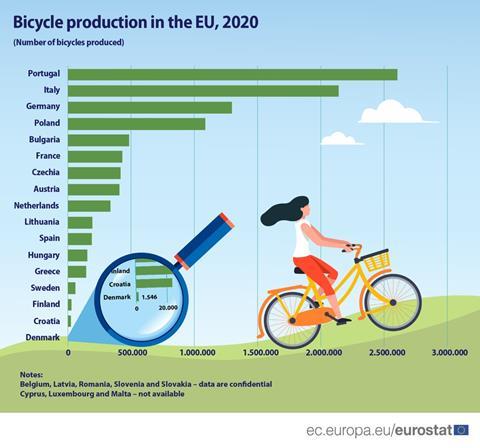 Bicycle production in the EU 2020