Peter Schöffel, managing partner of Schöffel Sportbekleidung, earlier this week published a motivational video for German small and medium-sized enterprises on Facebook, in which he called on them to emerge from a crisis stronger than before, particularly on the basis of healthy partnerships. And now, his company has organized 60,000 face masks for the Schöffel Foundation. The foundation was set up by Hubert Schöffel and his son Peter in 2011 to support projects in a specific county in southern Germany to initiate and promote projects for children, young people, families and the elderly and sick and for environmental protection. Following the death of Hubert Schöffel in 2018, Peter took over as sole director, while his wife Andrea Schöffel coordinates the foundation’s projects.

When there was a shortage of masks in the county in which the foundation operates, it was able to donate 60,000 masks with the help of the sportswear company, and which are certified in accordance with the European Standard EN 14683 and therefore approved as surgical masks but not for intensive care.

When asked whether Schöffel itself could produce masks in its Service Factory – the brand’s repair center – at the company headquarters in Schwabmünchen, Germany, the company replied that this was not considered in order to protect the health of its employees and also for capacity reasons. Instead, Schöffel has sought other ways to provide quick and effective support, as the current example of the masks for the Schöffel Foundation shows. 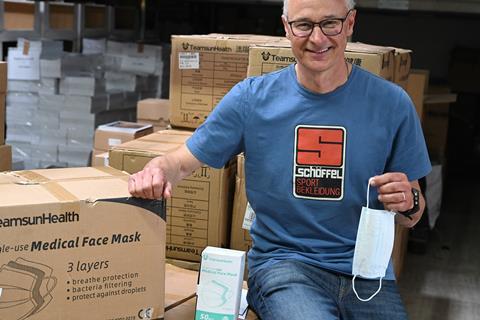