Biodegradability: The next battle in the war of greenwashing?

One of the main incoming extra features attached to synthetics this spring is biodegradability. Synthetics have come in for much criticism as they are seen as the primary source of plastics in the ocean, so would it make sense to have the visible part of them break down quicker: Is this the best solution?

Are natural fibers the answer?

Natural fibers have always had a reputation for breaking down easily within the environment, but even this is now being questioned as Cellulosic Type 1 fibers have been found in the Mediterranean, having been there for over a decade (that sea is warmer than the ocean, so decomposition should have been faster). Fortunately, Type 2 Cellulosic (wood-based) is still breaking up quickly, so the fleece from Tencel (as used by Vaude), spun by Pontetorto, is a winner.

Cotton garments found in sunken ships from the last millennium have lasted; the clever thinking points towards the 1950s being the tipping point of when the cellulosic remains in the ocean increased in volume. Cotton is six times weaker than polyester for the same denier of yarn, as investigations digging up the outflow pipes of sewage works during the investigation of quantifying the amount of textile break-offs from the laundry process have revealed. 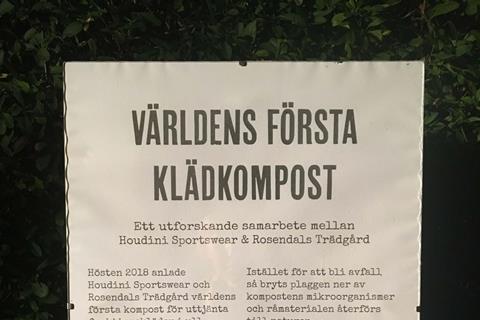 The Microfibre Consortium is leading this work, and the current thinking is that 70 years ago corresponds with the introduction of synthetic dyes and finishes. Worth noting is that no wool fibers were found at the outflow site – indicating that they decompose within the fortnight it takes for the waste to go through the water filtration plants.

Houdini is a brand that has embraced this benefit more dramatically than any other – at a past ISPO, when we were still able to meet physically, the brand served mushroom sandwiches where the plant had been grown on decomposing tops of theirs put into a compost heap. Not only did it taste magnificent, but all the journalists survived!

Is there a solution for synthetics?

The expected life of a petro-chemical material can be measured in centuries, so the biodegradable versions offer a 10-fold acceleration – but decades are still considered to be too long. The ISO measurement of this is essentially when the matter breaks down small enough to pass through a fine sieve; however, there are still concerns of the polluting effect (just from smaller particles) for textiles.

PrimaLoft has tackled this head-on by using the American Society of Textile Manufacturers testing standards: ASTM 5511 (aerobic – land-based), and 6691 (anaerobic – like in the sea), which measures in months and the remains must be non-toxic; the drawback is that these are under industrialized conditions – but this is a minor issue. The Asian brand CiClo has a rival product.

PrimaLoft’s Bio has now progressed from just being insulation, as Amaterrace has worked out how to weave a yarn with the additive embedded in it (thus no risk of the finish being worn off). The decomposition is completely over within three years. It was used in the Finisterre BioSmock, which became a 2021 ISPO Gold Award winner.

While the ISO standard is not the most suitable, there will be a host of products claiming to meet it, which will just add to confusion within the trade, let alone the public. What is required is pressure from the industry leaders for a more suitable standard for everyone to focus on.

Over 95 percent of oil extracted has been either burnt or buried within a year of being taken out of the earth; so little is used for textiles (which should be looped at their end of life). The qualm is that only rPET (polyester) is around in sufficient quantity to make it commercially worthwhile to recycle, but this is just one of the seven plastics categories. The majority of rPET comes from the waste of the drinks bottle industry. A better use of resources would just be to loop our plastics for further use – as opposed to having them decompose to disappear, but that requires a change of behavior from those that own the synthetic items. Until the education of this happens, it means that the sorting to conserve resources continues – it is good to have options that will decompose safely.

What is known is that the current situation is not good and must change; any change could have a positive effect. Until that time expect to have more confusion over biodegradability claims. When a panel was held on this subject at the last Performance Days, it became the center of attention for the day – listen back to it to help it broaden your knowledge of the range of issues.

The author, Charles Ross, is a textile specialist based at the Royal College of Art in London; he has taught Performance Sportswear Design to the next generation of Outdoor Industry designers for over two decades. His mantra is “Sustainability through Longevity.”