Earth Hour 2021 is a meditation for the planet

Most people associate the annual Earth Hour, organized by the World Wildlife Fund (WWF), with a symbolic gesture of their commitment to preserving our planet by turning off all the lights. But for this year’s Earth Hour on Saturday, March 27 at 8:30 p.m. local time, WWF wants to encourage supporters to create a moment of silence and rediscover their connection to the natural world through meditation.

Coinciding with Earth Hour in the U.S., scientist and Peloton yoga and meditation instructor Dr. Chelsea Jackson Roberts will host a nationwide meditation. The free 15-minute guided meditation invites individuals to practice gratitude for the many services the planet provides, reflect on their personal connection to nature and make resolutions for their future environmental journey.

The reason for choosing a new Earth Hour format is because of the rapid changes in society that put humanity at risk of losing its connection to nature. For example, the average American child now spends only 4-7 minutes per day playing outdoors, compared to over seven hours per day behind a screen. Humanity’s dysfunctional relationship with nature is a major cause of the Covid-19 pandemic, natural disasters caused by climate change, and food and water security issues.

Earth Hour is the flagship of WWF’s global environmental movement. It was born in Sydney in 2007 and has grown into one of the world’s largest grassroots movements for the environment in more than 180 countries. In the past, Earth Hour focused on the climate crisis, but more recently Earth Hour has sought to bring the pressing issue of nature loss to the forefront as well. 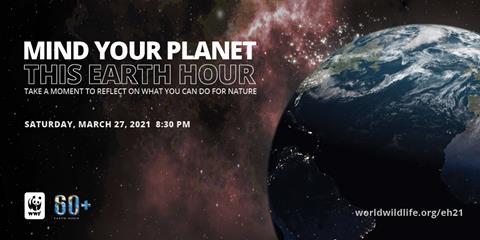