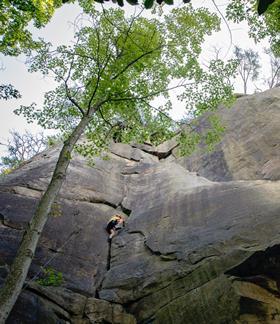 The U.S. has a new national park: the New River Gorge in the state of West Virginia, about an hour’s drive from Charleston, is now considered the country’s 63rd national park, thanks to the latest Covid-19 stimulus package. It has also been designated as the 20th Nature Preserve. Environmental protection for the area comes with its new name as well. While the Trump administration has been pushing back against such protection since 2016, an area designated as a National Park bars the wilderness from private ownership, meaning it can’t be purchased by companies.

The New River Gorge has long been a paradise for outdoor recreationists – rafting was possible there as early as the 1990s. Today, about 30 companies run tours along the New River, which is about 85 kilometers of whitewater. The gorge is the largest in the Appalachian Mountains. The area is also extremely popular with climbers. They flock to the area, especially in the spring and fall, to tackle the park’s more than 1,500 established routes, which are available here on the hard sandstone cliffs that reach up to about 300 meters in height. In addition, there is a 21-km system of mountain bike trails in the gorge.