Uvex offers protective glove with HeiQ Viroblock for everyday use 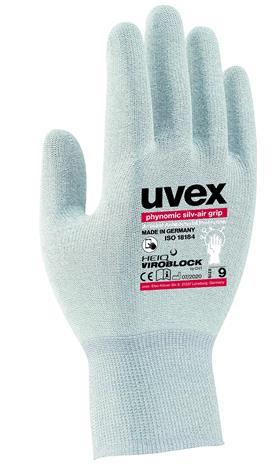 To successfully interrupt infection lines via smear or contact infections, the Uvex Safety Group, the occupational safety brand of the German Uvex Group that also owns Uvex Sports and Alpina, has developed the phynomic silv-air, a new protective glove with integrated HeiQ Viroblock technology. The special feature of this Swiss technology is the speed of the effectiveness: shortly after a contamination occurs, viruses and bacteria are verifiably inactivated within a few minutes (according to HeiQ, 99.9 percent after 5 minutes). This significantly inhibits the spread of potentially dangerous pathogens for the wearer and the possible spread already at first contact. At the same time, wearers of these German-made gloves also protect others by reducing the likelihood of transferring pathogens to other surfaces and ultimately ingesting them through the mucous membranes of the mouth, nose or eyes. The new gloves are suitable for use in everyday and professional life. They are available on Amazon for €14.99 per pair.