The VF Group has opened its first multi-brand store on a surface of 2,000 square meters on three levels in a landmark building near Milan’s cathedral. Named after its address, Orefici11 carries three brands – Timberland, The North Face and Napapijri – with dedicated show windows for each brand and dedicated areas for each of them in the upper floor. VF says it was designed for “Digital & Purpose.” The digital dimension has to do with functions like mobile check-out and allowing the customer to “move seamlessly between physical and digital.” The group’s press release does not go into details, but this is presumably a matter of data mining for personalized shopping. The “purpose” appears to be a social ambition – the championing of social causes such as environmentalism, for example – through “brands that hold clear and understandable values that go far beyond their products.” VF is hoping to turn the store into a “creative and cultural hub” for the city. It serves as a second Milanese store for The North Face, a return to Milan for Napapijri and a second European flagship for Timberland after the one opened on London’s Carnaby Street last year. It has its own website (www.orefici11.com) and Instagram account (@orefici11). 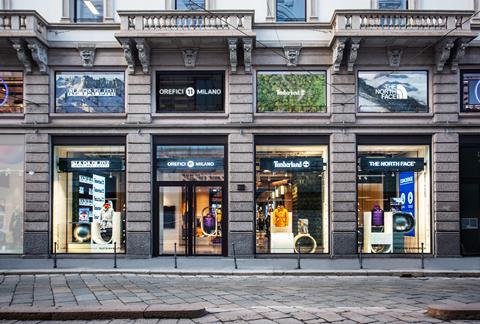